I like this image because I remember visiting Strofi Taverna in Athens. When you stand on the outside balcony, this is what you see. I was waiting for Dave. We were meeting a bunch of people at Strofi Taverna and Dave was worried they had not found the place.This was at least the third time we had been there in the trip.

Dave was worried he had given them the wrong directions, so off he went looking for them.  I was much too lazy to move. Me, I just stood outside and stared at the Acropolis. A young waiter said “Hello madam, would you care for a glass of house wine while you wait?” 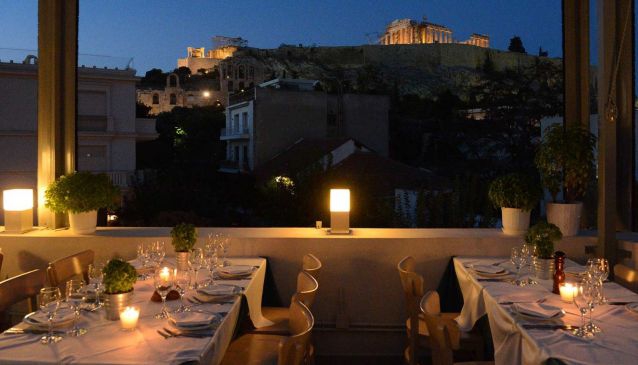 Now , that is a question that needs only one answer.

“Oh, yes”, I answered breathlessly. Ha ha, well it wasn’t the waiter I was in awe of…it was Athens and the Acropolis. I could not believe I was staring at it in the evening, all lit up, just standing there, defying history. There it was. Oh and the glass of house white?It was  an elixir.

Another thing I remember was being in Athens and standing near their parliament buildings. Suddenly a group of brown skinned guys came towards me.I freaked out because Dave had just been robbed, the previous November , by gypsies, in Trevi fountain area. They brown skinned guys were actually Syrians asking people for help. I blew it! Sometimes world politics are too confusing.

And then I remember being in Athens, standing with some people.They came to talk to us and then two of their friends came over. I tried to talk to one guy and he just totally blanked me.Like you say something to someone and they absolutely refuse to respond. It was so embarrassing! I remember, it was a couple from Jubail and two of their ultra conservative Christian friends from Texas.I think the girl teacher’s name was Laura. They lived on Murjan. Her husband was ok but their friends?Totally devoid of any human personality!

Becoming, is superior to being….T.S.Eliot