I remember Maher, our driver.He hooked us up with his cousin who drove us to Bethlehem, from Jerusalem. The Hebrew lady whose house we were staying at (Nicole), she wasn’t too keen on us getting in his car.But she spoke Arabic and Hebrew to him and finally gave her seal of approval as we set off for Bethlehem.

Once in Bethlehem, after a tour at a cousin’s cousin’s jewel shop (I bought 4 necklaces!), we went into the Church of the Nativity.There was a massive lineup of Russian Orthodox pilgrims. The Palestinian cousin said to me :”this is at least a two hour lineup.Come, I will get you in the back way my friend.” Now this struck me as so Life of Brian. Here I was, sneaking in the “back way”, the exit into the stable cave of baby Jesus, with a young Palestinian guy. Dave had no interest whatsoever in this adventure so I was on my own. In we went and lo….and behold….there it was.The spot that history has preserved as the stable cave where Jesus of Nazareth was born.And lo, Bethlehem Efrati, the lowliest city, but out of you shall come a mighty King….something like that (from Micah). Here is the correct quote:

2 “But you, Bethlehem Ephrathah,
though you are small among the clans[a] of Judah,
out of you will come for me
one who will be ruler over Israel,
whose origins are from of old,
from ancient times.”

And lo, Charlotte Harvey, though you are a world traveler and apparently a pillar of the community, in you sneak with a young Palestinian guide, to the stable cave of baby Jesus, jumping the two hour long queue of the Russian Orthodox pilgrims….Ah but it was worth it. There were a lot of people in that little cave, praying, chanting. It was a special moment to be there and even better, HOW I got there.  I was just waiting for a Monty Python skit to start.

The best place there was Hosh Jasmin. We visited there for lunch. We also went to Battir.

What a gorgeous place.  The food was simply heaven! 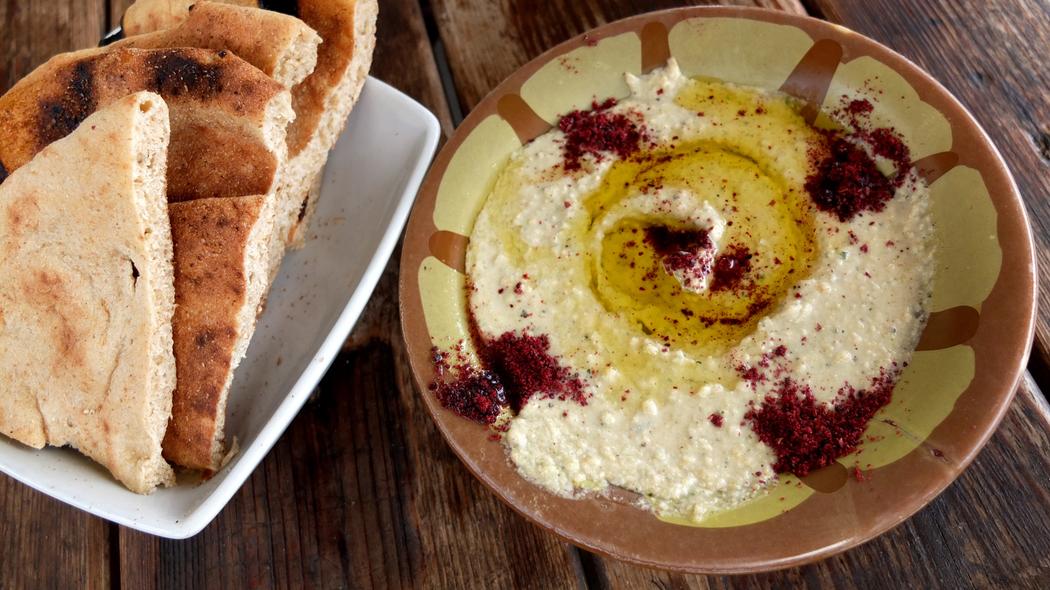 Look at that hummus!