What a moment that was! It was Spring time 2014. Faten, this lovely Somali girl, but not someone to be trifled with, burst into the little theatre at Dhahran school.

“Mrs Harvey, who the hell is this Anne Frank chick and why is she being so mean to my Justin?”

“Ok, let’s break this down, let’s unpack this “, I said, knowing exactly where she was going with this tirade!

Well it seems that Justin Bieber made a big slip up in 2014 at the Anne Frank House in Amsterdam. 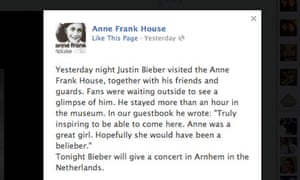 Why would he write such a dumb thing? The answer is, because he was denied  any cultural literacy, he didn’t go to school because the entertainment industry took over his life.

But then what’s the other side of the coin?Why did Faten not know of Anne Frank? Who was Anne Frank to her? She, a Somali Muslim, born and raised in Khobar, Saudi Arabia, where any teaching of anything Jewish is…..verboten!! She didn’t have a clue about anything remotely concerning the Holocaust or Anne Frank, whereas most children in America and Canada learn about Anne Frank in grade 5 at least.

But  then, later, why did Beyonce take a selfie there? Are we being too judgmental?Maybe Anne, lover of Hollywood stars, would have been thrilled to know that Justin and Beyonce visited her home.Judging by the posters and photographs she posted in her room, I imagine Anne would have loved meeting them both. But that’s not for us to say I guess. That poor little girl died in the gas chambers at Auschwitz: it doesn’t get any worse than that. She was, however,  a very hopeful young lady. Ah, what to say to Faten?

“Ok, Faten, here’s what happened. Anne Frank was a little German Jewish girl who, with her family, hid in an attic atop a house on the canal near Haarlem, in Amsterdam. She wrote down her memoirs in several diaries. Sadly, very sadly indeed, she died in the gas chambers at Auschwitz, a fate none of us even wish to contemplate for a second. And yet, her diaries gave the world so much hope!”

So when Justin wrote “Anne Frank…hopefully, she would have been a belieber”-well the woke left and right just flipped out. How could he say something so crass, so wrong, so uneducated, so insensitive? The answer is, exactly why you didn’t know who Anne was: you were BOTH denied education, you were BOTH denied under oppressive rule: YOU by the Saudi government, and Justin, but the insanity of pop culture and the ravaging effects it has on young stars.Look no further than Judy Garland to see what  havoc the industry can wreak on   young starlets.

“Faten, I know I am not allowed to teach you anything “Jewish” in Saudi Arabia”, I said, addressing the whole class. But class (my grade 11/12 Drama class), since I am leaving in June 2014, AND they can’t really fire me at this point, would you like me to teach you about Anne Frank, about the Holocaust, through a dramatic lens?”

Of course the kids said yes, and from then on we studied plays, monologues, scenes, stories, under the banner of Holocaust education. It was as if I had invented the whole thing: the kids, having been educated solely in Saudi Arabia, had never, ever heard of Anne Frank, the final solution, Auschwitz…none of it. Hard to believe right?

Well the same thing happened to Justin Bieber.While he was flying all over the world singing pop songs and busting cool dance moves, his Mother and the industry neglected to educate him on important facts of history.

It was the same for Queen Elizabeth II if you watch The Crown.She too felt denied a wholistic education, as her studies were confined to Constitutional law, etc.

So, because of Justin’s mistake and Faten’s blow up (she worshipped Justin Bieber) 25 Muslim kids got a huge Holocaust education from me. At least I did my job!

By the way, I hope this next post is fake cuz it is messed up!